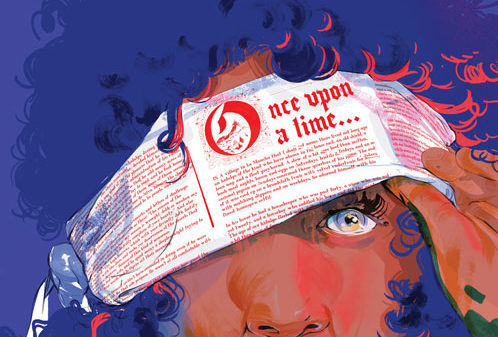 The Problem with Storytelling

This article from Cohere Partner Daniel Stanley was originally published by Stir Magazine.

What exactly is ‘storytelling’? Despite the recent ubiquity of the term, that’s a more difficult question than it might at first appear.

In the most traditional sense, it describes the age-old act of telling tales, an oral tradition relayed in person, often involving a campfire. More recently, it’s become a general way of discussing how authors create narrative forms of art across many mediums, from films to television, books to games, and the original, spoken form.

But in the last few years, a further use has emerged. From merely being a descriptive category or an element of artistic production, storytelling has now become something we should all be doing, a method that everyone should master in the age of social media.

In particular, any organisation that sees itself as having a social or ethical cause is told that the key to their success is effective storytelling, though often with little definition of what exactly that means in practice.

It’s not hard to see why this has happened. The idea that you can just apply a simple method, and your business, your project, or your cause, could borrow some of the glamour and attractiveness of a Hollywood blockbuster, is a pretty compelling one.

And of course, there are many straightforward lessons here that still need learning.

Most obviously, if you are trying to connect with an audience, describing it through the lens of people’s experiences (or your own) can be far more emotive and powerful than raw information or statistics. That you need to gradually draw people in, make them intrigued and curious, rather than just immediately unloading your central message.

However, attempts to advocate for ‘storytelling’ as a method, tend to consist mainly of paeans to the wonderful things that stories can self-evidently ‘do’ – inspire us, bring us together, help us see the future, and move us to action.

More often than not, these are accompanied with dubious neuroscientific claims to the effect that we are ‘hardwired’ to find stories compelling, but rarely any real practical suggestions, or reasons why some stories might be more successful than others.

Where more depth is present, it often relies heavily on The Hero’s Journey, a ‘monomyth’ developed by the late American mythologist Joseph Campbell. As a researcher, Campbell studied great myths and legends from across the world, and attempted to synthesise them all into one myth to rule them all; a core archetypal structure behind all compelling human narratives. This was outlined most famously in his 1949 book, The Hero With a Thousand Faces. 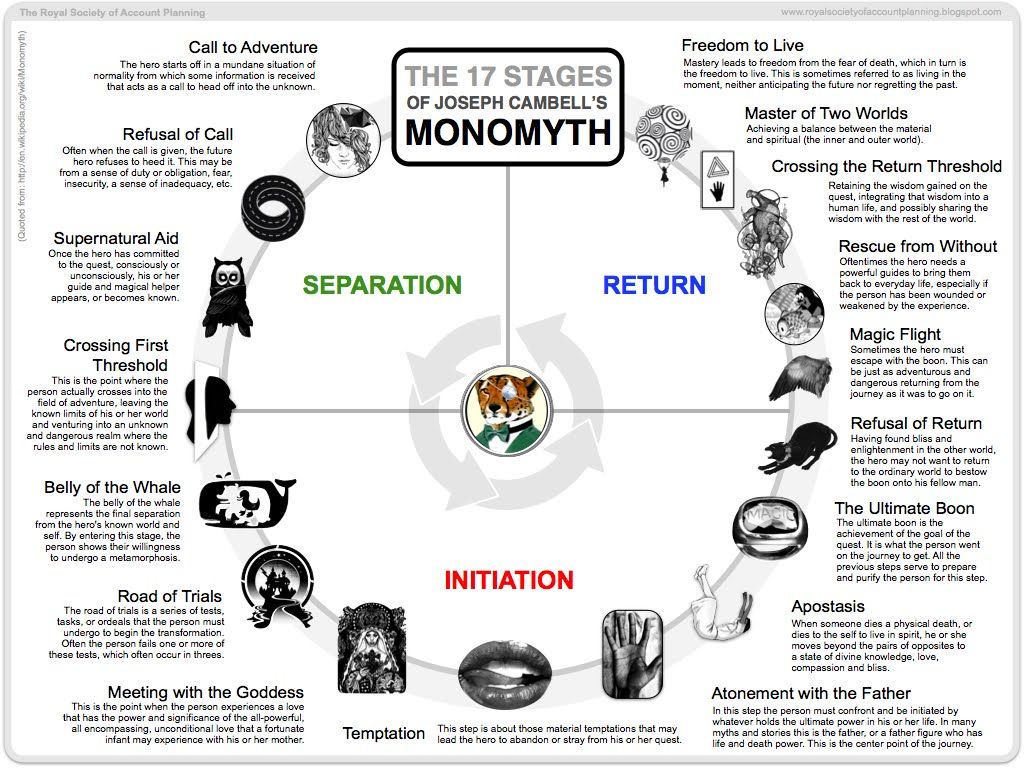 One of the helpfully simple diagrams explaining the ‘Monomyth’

The influence of Campbell’s work is undoubted – particularly on the film industry – where it is credited as an inspiration for Star Wars, The Matrix, and many other blockbusters. Certainly no-one who has absorbed the current wave of superhero movies would doubt the existence of a governing theory that produces a consistent narrative structure across all of them.

However, the relevance of all this to the practical day-to-day job of communicating about projects, businesses, and causes is rarely unpacked. Instead the theory merely lurks in the background, serving as a sufficiently complex verification that the experts do in fact have some justification for the conclusions they are drawing, even if they rarely explain the exact connection.

No doubt, The Hero’s Journey is an interesting concept, and much can be learnt from it. But as a guide to effective, everyday communications, its complexity and specific form make its usefulness questionable.

Campbell himself admitted he left out examples and aspects of world myth that didn’t fit his project for a common narrative, and in a contemporary light many of its assumptions seem distinctly questionable.

Indeed, the whole idea that it is possible to amalgamate thousands of years of culture from all over the global into a single, homogenised format without imposing your own cultural bias and perspective is something that would likely be treated with derision were it attempted today.

And when you start to look more closely, it’s not hard to see that the perspectives of a 1940s American academic are present in the ‘monomyth’, based as it is around an individual journey of redemption and transformation, as a lone hero progresses through trials, doubts, and (feminine) temptations.

Even if we consider Campbell’s synthesis as accurate, is this story of lone heroics really the one we want to use as a template for all our own narrative creations, imbued as it is with the values of ancient societies with very different priorities than our own?

In the age of celebrity and global superstars, heroic individualism may sell well. But as we grapple, for example, with the consequences of a reckless technology industry, whose negligent attitude to our institutions and culture is the product of founders who certainly see themselves as heroes in their own story, it’s right to ask if these are the narratives we really want to propagate. Do we really need more people who think they are heroes on a personal mission to save us?

Here we begin to get at a more fundamental problem with ‘storytelling’ – and the related idea that what is needed is more ‘good stories’. Because the truth is, storytelling really is just a story itself, and as any good literary critic will tell you, it’s by reading between the lines, looking at what’s implied and left out as well as what’s most obviously presented, that you can understand what is really going on.

In the case of ‘storytelling’, the central issue is an assumption that what is needed to solve our social problems and change the public’s mind is a ‘method’ – that we have all the materials that we need, and all that’s needed to present alternative ideas is a better way of conveying them.

This focus on technique – how we tell the stories – at the expense of thinking more deeply about the nature and content of such stories is dangerous in a number of ways.

As suggested by the example of ‘hero’ stories, what makes a story ‘work’ well in terms of attracting people, or persuading them that you are of interest, may actually be unhelpful or even damaging to your wider goals for the world.

We’re used to trying to analyse the moral of a story, and all stories convey values and have effects beyond their immediate effectiveness as pure communications techniques. For example, it has been shown in studies that while appealing mainly to people’s more internally-focused values can be very effective in getting their attention, and even encouraging action, over time this will cause them to become more self-centred and less interested in more social goals.

Similar effects have been shown with charitable appeals, where emotive stories about desperate children can be initially effective at getting donations, but will eventually lead to a sense of hopelessness, and a reduced responsiveness to future appeals.

The power of implicit aspects to language extends also to metaphor. For example, choosing to describe a wave of crime hitting a neighbourhood ‘like a beast’ may work well as ‘good storytelling’ – but doing so could unintentionally have an impact on your audience’s opinions. Suggested solutions differ hugely if the metaphor presents crimes as more like a disease.

Recently much has been made of the concept of ‘framing’, a more strategic approach to communication. Framing explores how the terms and concepts we inherently use can bring into focus one aspect or other of an issue, giving it prominence, and, therefore, pre-emptively influencing the viewer’s reaction.

This does to start to address some of the problems with storytelling-as-technique that I have described here. It’s proven a useful way of encouraging organisations to think more deeply about how they communicate, and the implications.

But, like storytelling, it’s increasingly being treated as another ‘magic method’, one that can be packaged into a discrete set of simple and repeatable steps, applicable to any issue as required. This repeats the fundamental problem with the idea of storytelling as a transformative method, plaguing the way we think about communication.

At heart, the problem is putting too much emphasis on the communicator and not enough on the nature, characteristics, and context of who organisations are communicating with. Or the relation between the participants. This is a problem that is rooted at a basic level in the English language, in the very nature of the metaphors we use to describe the communication process.

On a practical level, it leads people to put insufficient effort into the crucial aspect of any effective communication – a real analysis and understanding of each specific audience and the adjustment of your message based on their response. It also implies a hierarchical relationship in which a more educated or informed storyteller pushes out their stories to a passive audience.

A response to this could be to assert that ‘good storytelling’ is just what takes all these things into account, which thinks about the audience, about implication, about values, and so on. That is more collaborative and less hierarchical. But that only reiterates the mistaken attempt to find a perfect method, rather than understanding the fundamental flaw in such a quest.

Why does all this matter? Well, I would argue that three of the big issues of our time – inequality, climate change, austerity – and the failure to make major strides in galvanising public opinion behind potential solutions has demonstrated the mistake of throwing our efforts into ‘good storytelling’ approaches, which are attached to conceptual definitions and framing that are inherently weighted against change.

Advocating for improved storytelling as the best way to make progress on these issues focuses our attention too narrowly. It leads us to waste energy on refining inherently limited techniques, or taking actions within circumscribed boundaries, while blinding us to the vital context and strategic thinking that is needed as a precursor to effective persuasion and action.

Storytelling as a method is itself just a story. But what in fact it increasingly resembles is a ‘MacGuffin’. First highlighted by the English film director Alfred Hitchcock, this is a goal or object, which despite lacking much definition, is strenuously sought by the protagonists, and drives the plot of many tales.

While it may seem alluring, the point of MacGuffins is that they are rarely if ever attainable – or even really intended to be – and that the real discoveries come in realising that what you actually need is something else.

In this case, we need to abandon the search for our own magic device that will make everyone agree with us. Instead, we should accept the challenge of understanding context, language, concept, implication, and culture, and use this understanding to build a system of thinking that appeals to common human values, personality, and preferences in our modern cultural context.

This would provide the basis for storytelling – and other ways of communicating – that can move us reliably towards the future we want. What we need is not just a good story, but an irresistible ideology, capable of challenging our presently dominant one. Only with this common understanding can the collective action at the scale we require become possible.