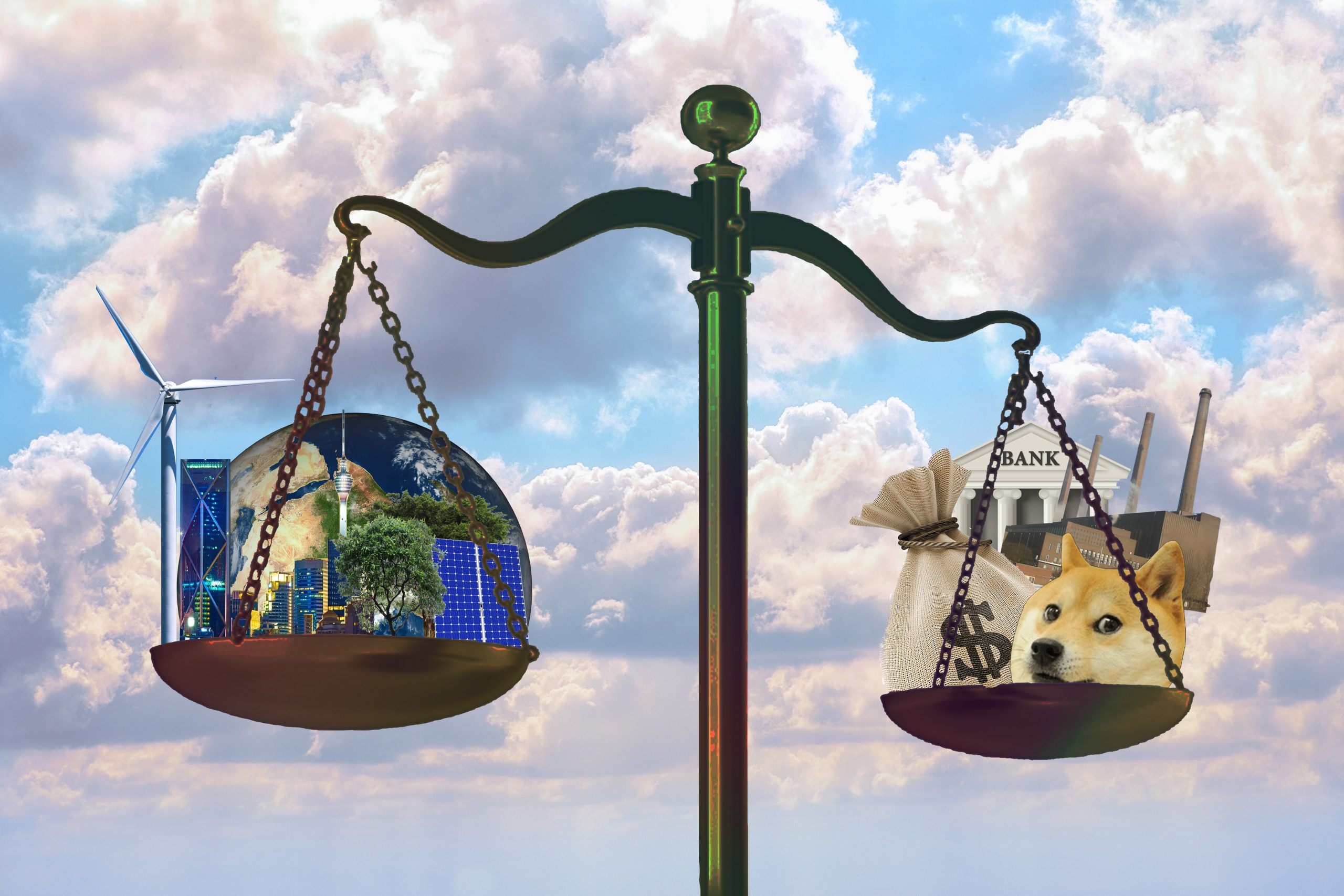 Dogecoin started as a joke. In 2013, two software engineers designed a tongue-in-cheek cryptocurrency that parodied the plethora of digital ‘altcoins’ offering an alternative to traditional payment systems. They named it after a meme featuring a suspicious Shiba Inu that was ubiquitous at the time. But after an explosion of interest, this year the value of Dogecoin rose by 17,000% between January and early May, with transactions so rapid that they crashed one major trading app. Dogecoin had become yet another speculative bubble – a means for people to gamble on huge financial rewards without adding a penny (or Doge) to real-world economic activity.

Over the past decade, fintech has evolved from something that was promised to liberate us into something that simply replicates the failings of our current financial system. Should we be surprised? Inequality, instability and exploitation seem hard-wired into the system, and technology on its own can’t change that.

We know a different approach to finance is possible: ethical alternatives to the big banks and investment firms have existed for decades, using finance to deliver positive impact while providing a good financial return for their customers. But awareness is low and they’re still a tiny niche of the market: in 2019, for example, UK members of the Global Alliance for Banking on Values held less than 0.2% of the UK retail savings market. Could the stories we tell ourselves about money and finance be part of the problem?

Earlier this year, the Future Narratives Lab, a non-profit initiative hosted by Cohere, embarked on an exploratory project to understand the role that narratives play in limiting the reach of ethical finance. We found that the cultural patterns and models we hold about money and finance are a significant barrier to the growth of the movement. Our current financial system is held in place by our implicit and explicit beliefs about what money and finance are and what they are for. Should they serve everyone, for example, or just those lucky enough to have the resources to bet on the crypto markets? We are in the midst of a struggle for the future of finance – and public narratives may well determine the outcome.

The challenge for communicators

Operating in a financial system geared towards short-term profit above all else, in which ordinary people feel unskilled and powerless, ethical finance providers and campaigners face an uphill struggle to communicate. Money and finance don’t feel tangible or accessible, while a proliferation of labels and vague promises hinders engagement. The details of ethical finance – such as ownership, governance, mission and investment policies – can alienate and bore an audience that is already reluctant to engage with finance. But without the detail, it feels impossible to differentiate the ethical finance sector from corporate spin.

Too often, communications campaigns intensify the faith of those already committed to ethical finance, while failing to reach new audiences. To create the scale of impact needed to build a better financial system and a better world, ethical finance needs to become a mainstream activity. But it’s difficult to establish a sense of collective power when people rarely talk about money and individual financial decisions are dwarfed by the scale of the financial system. Ethical finance providers must also confront the fact that participation in the market is limited to those with sufficient wealth to save or invest, excluding around a third of UK adults and nearly half of 18-24 year olds – those with the biggest stake in the future.

Making sense of money and finance

To understand how to tackle these challenges, we need to understand the terrain they play out on. Our research found that people have differing attitudes to ‘my money’, which generates feelings of embarrassment and does not connect to our sense of identity, and ‘the financial system’ as a whole, which is seen as overwhelming, suspicious and belonging to ‘the experts’. 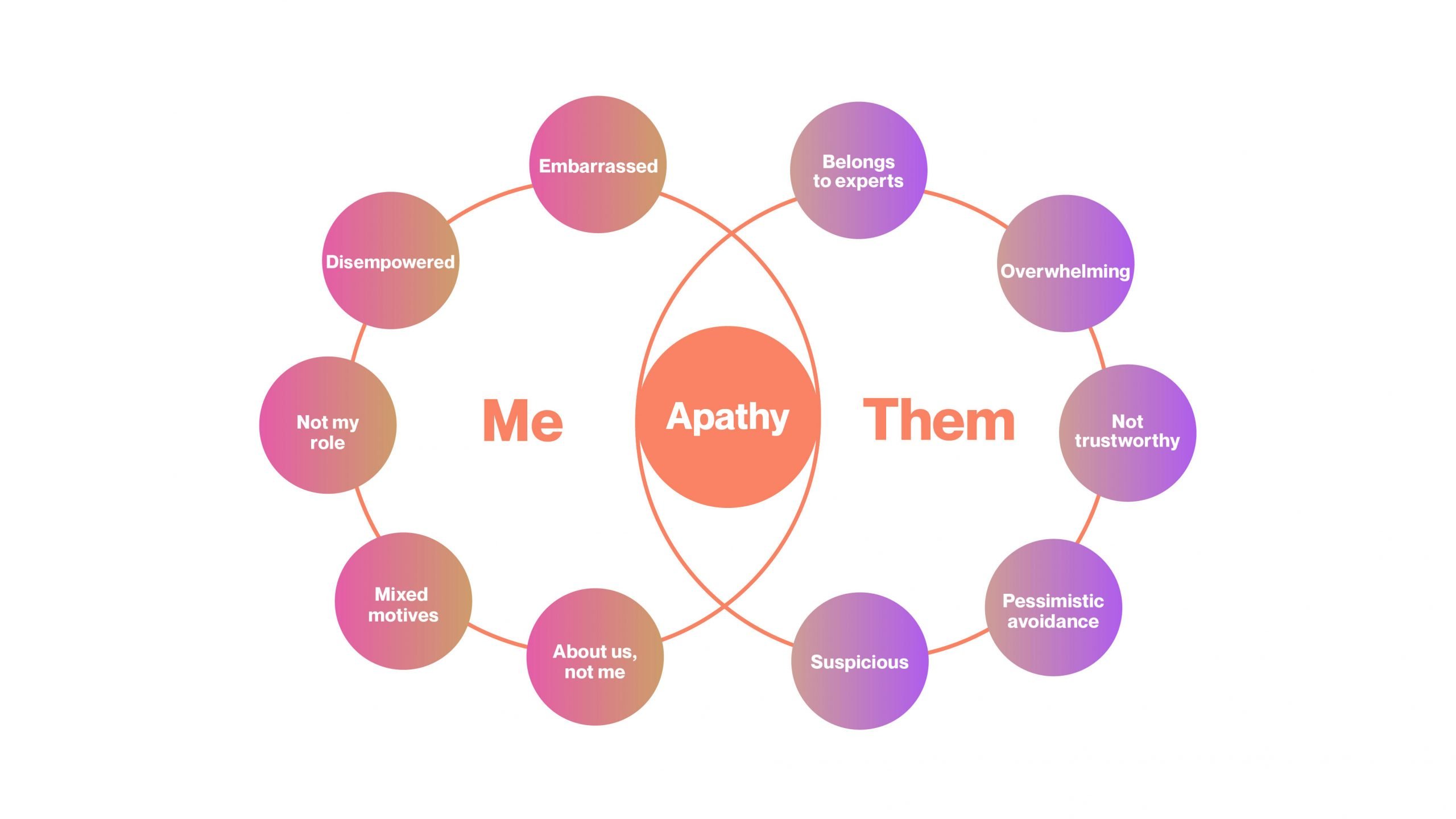 Three core themes emerge from our exploration of these attitudes and beliefs:

The combination of these three themes has a powerful influence on the public discourse, creating an overwhelming sense of apathy and inertia around money and finance.

What underpins this way of seeing the world? Our research identified a collection of narratives that mask the fact that money is not a neutral object but a representation of social relationships, infused with human values, and that finance is a human system that can be redesigned to serve our common goals. As we explored these narratives, we found an even deeper layer of tensions about the way money and finance span both the private domain (our identity, our households) and the public domain (workplaces, markets, etc.). We also saw that money and finance are usually categorised as existing for private gain – but they should also serve the public good, providing essential economic infrastructure and creating positive social and environmental impacts.

We are at an early stage of understanding how these public-private tensions can be resolved, but it’s clear that the complex, ambiguous nature of money and finance is disorienting and confusing for many people. This is compounded by the deep inequalities of power in the financial system – even if we reimagine how money and finance work, we need to tackle the power structures that define and maintain the current status quo. How can we build a mass movement of citizens and customers with the power to transform our financial system?

This research was an initial, exploratory project that raises as many questions as it answers. But it’s clear that we can’t address the complex challenges of narrative change without greater collaboration between ethical finance organisations and sectors, developing and testing new narratives and sharing learning from their application, and involving those we seek to influence in the process of developing and testing new messages. We’re sharing our initial findings and recommendations in a briefing paper, which we hope will be the beginning of a much bigger conversation about narratives and ethical finance.

Meanwhile, Dogecoin has perhaps reached peak hype in the form of Elon Musk’s guest slot on leading US TV show Saturday Night Live, which was peppered with mentions of the coin. Did he take the opportunity to set the record right on Dogecoin? Not quite, according to Reuters:

Asked ‘what is Dogecoin’, Musk replied, “It’s the future of currency. It’s an unstoppable financial vehicle that’s going to take over the world.”

The price of Dogecoin fell spectacularly.