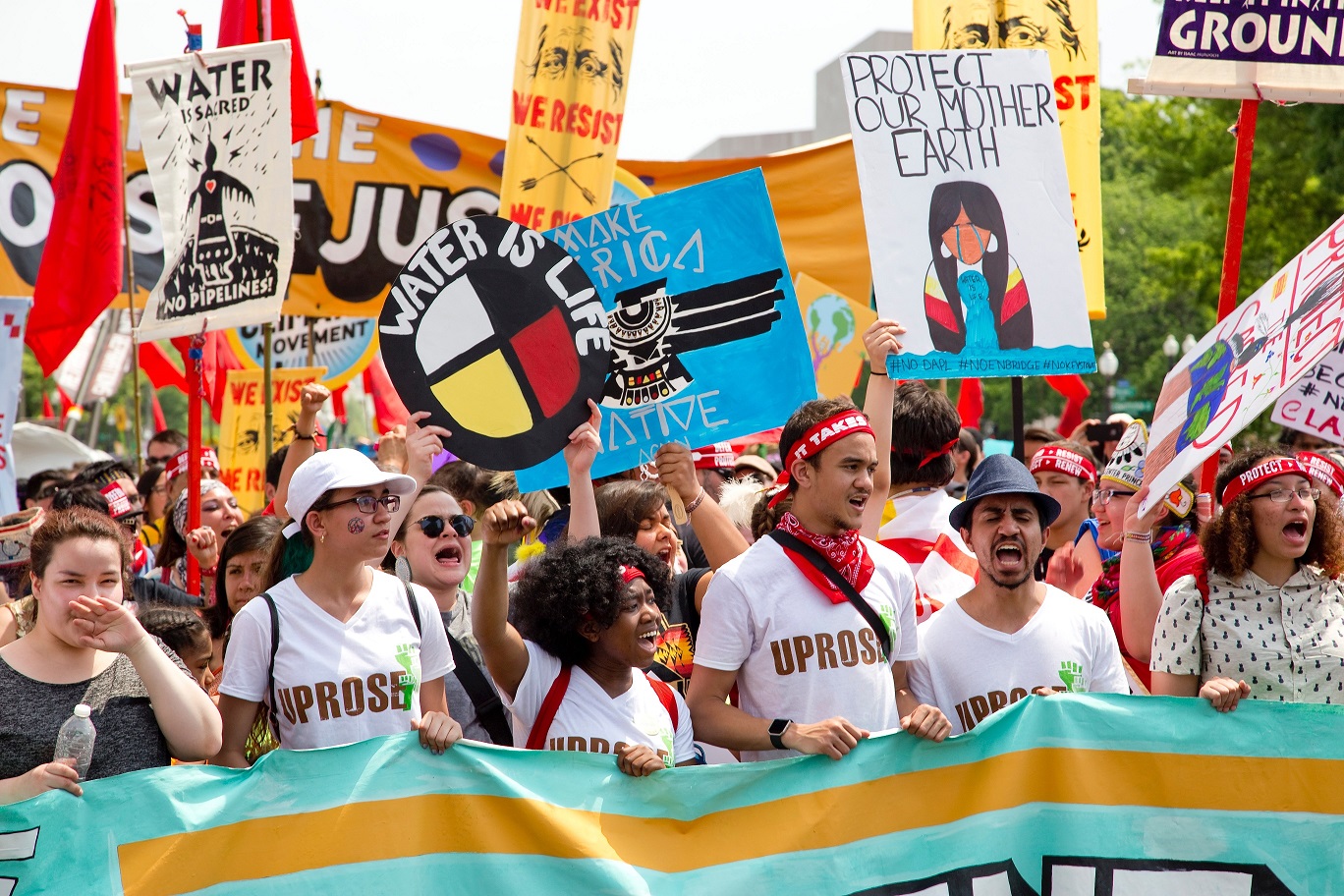 The Future of Capitalism? Two takes – and two mistakes

Only a few years ago it would still have been seen by many as a fringe view to publicly proclaim that capitalism was in crisis. While the economic crash of 2007-2008 and the subsequent bank bailouts at first seemed to pose a fundamental threat to the global system, once it was clear it had survived such a severe shock its resilience seemed only emphasised .

But with the remarkable political events of the last two years, the idea that something is fundamentally wrong with the prevailing social and economic model of the ‘developed’ world has suddenly swung into the mainstream.

This was illustrated over the last week, where I attended two large scale events that shared this fundamental premise. But despite the common diagnosis, the style, analysis and solutions they offered could hardly have been more different.

On Thursday it was the straightforwardly titled ‘The Future of Capitalism – Working For Or Against Us?’.  Hosted by Aviva at its London HQ, the event was the brainchild of ‘Reboot the Future’, a charity extolling the ‘Golden Rule’ as the age-old solution to our contemporary crises. 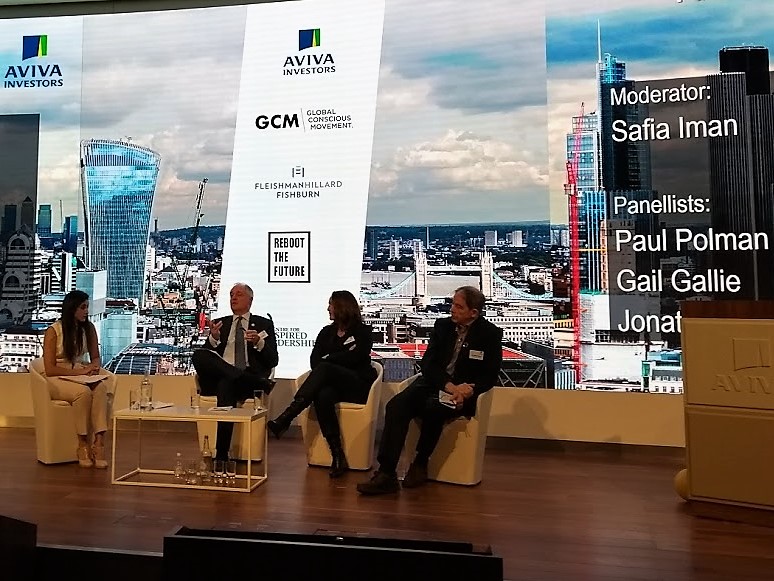 The level of the speakers certainly matched the ambition of the title, in particular Paul Polman, CEO of Unilever, joined by a range of other senior figures including the founder of Forum for the Future Jonathan Porritt, Lord Bird of Big Issue fame, and Aviva’s own head of Responsible Investments, Steve Waygood.

Across two hour-long panel sessions there was a clear consensus that something fundamental is ‘broken’ in how capitalism currently works, and that radical change is needed to address this.

Exactly how this change could be achieved was where the consensus started to break down.

Lord Bird, as energetic as ever, passionately asserted that ethical consumerism was the only solution, and that we need a ‘social Amazon’. Paul Polman advocated for ‘moral leadership’ and ‘willpower’ from business leaders – but left hanging what we might do to make this a more popular choice.  Jonathan Porritt was more practical, setting out a shopping list of policies, from redistributive taxation, to a carbon tax, and other steps to ‘internalise externalities’. But as he acknowledged, such measures would rely on sustained political support, not only domestic but globally.

A few days later saw a very different set of proposals, though in quite a similar setting.

In the De Vere Grand Connaught Rooms in Holborn, The Labour Party set out its vision for ‘New Economics’ at a full day conference on ‘Alternative Models of Ownership’.

Heavily trailed over the preceding days, and subsequently followed by the standard range of television appearances, the event launched the Party’s commitment to renationalise a whole swathe of formerly publicly run services, in particular water, energy and rail.

Certainly, as many of the speeches made clear, the faults and missteps of privatisation over the last three decades have only been emphasised by the recent collapse of Carillion.

Labour’s response to this is definitely radical, proposing large scale renationalisation of those industries, though they were keen to stress, not in the ‘hierarchical, bureaucratic’ model that had characterised them in their previously state-run form. Instead this would be a ‘democratic, participative’ form of public ownership.

Beyond this general aspiration, it’s fair to say there was little specific detail on exactly what this would mean in practice – Jeremy Corbyn’s closing speech, as had those that preceded him, leant most heavily on critiques of the current and historical setup rather than tackling exactly how these new democratic ways of operating would work in practice when applied to any of the industries in question – or indeed how the transition from their current condition and ownership would take place. 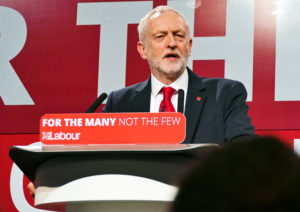 The event as a whole also seemed a little narrow in its scope – across the eight presentations there was little to explain how alternative models of ownership might be encouraged across the majority of the economy as a whole, beyond those industries with ‘natural monopolies’, often previously state run, or adjacent sectors of local government and housing.  One of my side interests is in co-operative business models, so I was pleased to see a commitment to double the size of that sector, but its current size means this is really a drop in the ocean as far as the economy as a whole is concerned.

So far, so different from the previous  event, where re-nationalisation was not mentioned once as a solution to the ills of capitalism. But the divide was more than rhetorical – I’m fairly confident that I was the only person to attend both events, and I’d be surprised if anyone else that went to one had heard of the other, at least beforehand.

Reconciling two very different worldviews and cultures like this is never going to be easy. But given that both are in essence trying to solve the same problem – the failure of capitalism as it currently stands to produce better outcomes for people and for the planet – it is a bit worrying that there is so little overlap. If we’re going to build a better form of capitalism – or indeed a new system of any sort that involves private enterprise – it’s going to need a common ground between these two worlds as the basis for working together. And that currently seems to be lacking.

So how might we encourage such coalescence? Well there were actually a couple of things the events did have in common – ways they could have been better. And improving those areas might well expand the reach of both, to the point where they may even begin to overlap.

Firstly, at both events, almost every speaker was keen to articulate their belief in innovation, wider participation, and getting the input and ideas of as wide a group as possible. But the format of both events remained resolutely hierarchical and traditional, with the majority of attendees expected to sit and listen quietly to more informed people on a stage for several hours, rather than talk to each other, work on specific ideas and topics, or spend their time in a more collaborative, constructive way.

This is hardly a rare fault of contemporary events – even when just looking at those talking about innovation or social change –  but it’s still always disappointing. If people are to develop new ideas, work together, and reach beyond the immediate networks of the organisers, you need to create space and encourage attendees to build links, beyond just a short networking session at the end.

Secondly, both events could do with taking a close look at their language.

The first  event was, on the face of it, ahead in this respect, having by far the more evocative and imaginative title, which clearly helped persuade a wide range of people to attend. But while the speakers were of suitable seniority to answer the question it set, it’s debatable whether the actual sessions really made a direct effort to do so – I have to admit that while I learnt a lot of new information,  I certainly didn’t feel any clearer whether capitalism was ‘for us or against us’ at the end.

While the sin here might have been over-promising, the Labour conference was towards the other end of the scale. While the event was only promoted to the party membership – and sold out easily – it was still intended as presenting their agenda to a wider audience, so presentation matters, and was disappointing in a couple of respects.

Starting on a practical level, the title of the event was dull, literal and descriptive, giving no sense of energy, character or vision. And this set the tone for how the whole session was described throughout, as well as the style of many of the sessions – despite the many impressive individuals speaking and interesting content they covered.

Beyond this, though, the messaging of the overall policy didn’t seem thought through. As previously mentioned, every time renationalisation was mentioned, it was quickly accompanied by careful stressing that this was definitely not the old-fashioned bureaucratic type that opponents would say it was. This became  such a core part of the message that listening to a news bulletin later that night, it was the only descriptive part of the policy that was included.

The big problem with this is it fails one of the basic principles of messaging. It’s long been known that repeating negative allegations about your policy, or your strategy if you’re a business – even in attempting to negate them – serves only to reinforce those associations in people’s minds. It’s such a basic part of framing, that it is literally in the title of the most famous book on the subject – ‘Don’t Think of an Elephant’.

If Labour wants its approach to be seen as different and new, then the language used should be entirely so – looking to build new associations with innovation, dynamism and the future, not reminding people of the exact opposite characteristics that their opponents seek to point out.

If the party is going to reach beyond it’s still-enthused base, and persuade the country at large to give radical new policies and approaches a chance, it needs to be far more creative and ambitious in the language it uses.

This is something we all need to bear in mind, if we are interested in the future of our economy and society. Talking about the limiting effects of media echo chambers and filter bubbles already feels clichéd, but undoubtedly we are in a situation where it’s easier than ever to just end up speaking only to people who already agree with you. This might be fine if all you want is validation of your point of view – or the success of a closely targeted marketing campaign. But if we are talking about societal transformation, or indeed any project seeking to reach across boundaries and gather a wide coalition of groups, then we need to move beyond the standard techniques that more often reinforce these barriers than dissolve them. And a good place to start is in how we structure our interactions – and our choice of language.